Review: Hulk: Beauty and the Behemoth 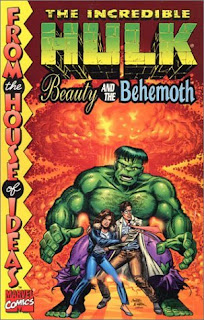 Much like X-Men: Road Trippin’!, the trade I reviewed last week, Hulk: Beauty and the Behemoth was one of Marvel’s earliest modern collected editions. However, the two books lie at very different ends of the same spectrum: whereas there’s very little tying the stories collected in the X-Men trade to one another, the contents of Beauty and the Behemoth were obviously chosen to push a very specific agenda forward. In short, Marvel wanted readers to accept both the recent death of Betty Ross (Bruce Banner’s longtime girlfriend, and later his wife) and the sudden departure of writer Peter David, who had been writing the series for over a decade.

The death is featured in the final issue of the collection, which was published just a month before the trade came out. It’s obvious from Marvel’s haste to release the collection that they wanted to give the story as much weight among readers as possible – if the story appeared in something as seemingly “permanent” as a trade paperback, the editors must have thought, readers would be more likely to accept such a radical change to the status quo. It’s really hard to take the rest of the trade seriously, in this light, since it’s obvious that it was just slapped together to have something to fill up space before the death issue.

Some of these preceding stories are, admittedly, pretty good. I actually haven’t read much of Peter David’s long run on the series, so it was nice to see a few of his better issues collected here. The issue featuring a therapy session involving Doc Samson, Bruce Banner, and the two versions of the Hulk (Green and Gray) that make up Bruce’s subconscious is an especially good one. There are a few decent non-David issues too, including the John Byrne story in which Bruce and Betty are finally married. Only one story doesn’t seem to fit the theme of Bruce and Betty’s relationship – a bizarre 1973 issue by Steve Englehart and Herb Trimpe, in which Betty has been transformed into a giant green harpy.

As for the death story itself, it’s fairly absurd. Betty becomes sick on the first page (presumably from some sort of radiation poisoning, although it’s never really explained), and by the last page she is dead. The main story has Bruce and Thunderbolt Ross (Betty’s father) watching over her in the hospital, and this is interspersed with flashbacks as the wife of longtime Hulk sidekick Rick Jones reads Betty’s recently published autobiography. Unfortunately, it all reeks heavily of ridiculousness and sentimentality, proof that such major shake-ups in comics need to be earned over a period of time, not simply dumped into readers’ laps in a single issue.

It’s obvious from David’s comments in the introduction and afterword that he was not at all happy with the decision to kill off Betty, one that was made by his editor. In fact, after having written nearly 150 consecutive issues of the series, the one after Betty’s death was his last, and the writer doesn’t shy away from saying that his departure had to do with “creative differences.” The whole situation reminds me of the Spider-Man: One More Day controversy a few years ago, when J. Michael Straczynski was forced by Marvel editorial to write a story dissolving Peter Parker’s marriage to Mary Jane Watson. Like David, he had been writing the same title for quite a few years, and he was quick to leave it for good when the decision was forced on him. It just goes to show, I guess, that the more things seem to change over the years, the more they really do stay the same.

So while there are a few good stories in this trade, the fact is that Marvel’s agenda behind releasing it was a pretty disagreeable one; even if Betty’s death has since been undone in the actual comics, the fact remains that this trade is little more than a testament to an act of blatant disrespect for one of the company’s best and most popular writers. Instead of reading it, then, I would suggest simply picking up an early volume of the Hulk Visionaries: Peter David series. After reading several worthwhile stories from his run in this book, that’s certainly what I’ll be doing.