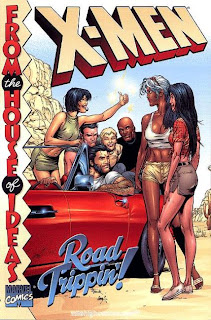 Published in 1999, X-Men: Road Trippin’! was one of Marvel’s earliest efforts in what would eventually become a fairly comprehensive collected editions program. Like a number of Marvel’s other “greatest hits”-style trades from around this time, though, it suffers from a complete and utter lack of focus. The only thing supposedly linking the issues collected in this trade is that they all involve X-Men characters “hitting the road,” taking some time off, that sort of thing. I say “supposedly” because that’s only the case for a couple of these stories – really, this trade is just a cobbling-together of random issues that span the range of Marvel history from Chris Claremont’s celebrated run in the 1970s to the time of this book’s publication in the late 1990s. Furthermore, only half of the issues are actually about the X-Men; the others feature either Wolverine going solo or ancillary X-teams like Generation X and X-Force.

The first issue collected is Generation X #4, the first issue of the series to be published after the “Age of Apocalypse” crossover that swept through the X-titles in 1996. It’s not necessarily a bad story, but nothing of much consequence happens: Jubilee, Skin, and Synch head to New York City, fight some random mutant, and then the issue ends on a cliffhanger. (Oh, and Chamber broods in his room while Husk gets drunk by herself at the X-Mansion, for some reason.) It’s clear that this issue was only included because someone at Marvel thought the NYC aspect made the story fit the “road trip” bill, but seeing as the characters barely interact with the city itself (not to mention the fact that Generation X is already based in New York to begin with), the connection is a tenuous one at best. No context is given for the story either, making it all the more frustrating. In fact, even though I recently read the first three issues of the series in Generation X Classic, Vol. 1, I still felt sort of lost here.

The Generation X story is followed by two late-‘80s issues of Uncanny X-Men, both written by Chris Claremont but drawn by different artists. The first one, penciled by Marc Silvestri, focuses solely on the team’s female members – Storm, Psylocke, Dazzler, and Rogue (well, Ms. Marvel possessing Rogue’s body, technically…but that’s a long story). The ladies decide, on Dazzler’s suggestion, to relieve some stress by hitting up the mall. Again, I’m not exactly sure how going to the mall qualifies as a “road trip,” but that’s the least of this story’s problems. The women transform into materialistic airheads the second they arrive, and Dazzler in particular is almost unbearably annoying at times. They also run into Jubilee (in her first appearance) and fight the M Squad, a group of bumbling mutant-hunters who serve as a thinly-veiled Ghostbusters parody. Their “hijinks,” unfortunately, aren’t all that amusing; although perhaps I was too distracted by the fact that Dazzler, who in every other appearance she has ever made has been Caucasian, appears to be African-American throughout this story.

The second issue of Uncanny X-Men seems to aim for humor as well, but again, Claremont’s writing simply falls flat. The story revolves around a group of moronic aliens who try to take over the world but are put to a stop by the male members of the X-Men, who are all drunk after going to a bar. Rob Liefeld handles the art, and while it’s not as bad as some of his later work, there are some truly cringe-worthy moments as he tries to sneak characters like Darth Vader, Chewbacca, and Alf into the alien invaders’ ranks. A Wolverine/Chewbacca throw-down would actually have been pretty cool, now that I think of it, but alas, all we have is this lame waste of paper instead. (I would be remiss not to point out that this issue also shamelessly sets up Wolverine/Havok: Meltdown, a 1988 miniseries which is a far better story if you’re looking to read a comic featuring those characters.)

The next story, taken from a 1995 issue of Uncanny X-Men, has little to do with the trade’s supposed theme either. As far as I can tell, it was included because it contains five pages of Iceman and Rogue talking as they drive cross-country (where they’re going is never fully explained). The rest of the issue isn’t bad, and the art by Bryan Hitch is fairly impressive, but taken out of context from what was going on in Uncanny X-Men at the time, the story has little real impact.

Next come two issues of X-Force (issues 71 and 75), and to be honest, these were the stories I was least looking forward to reading. I’ve never read much of New Mutants (the series that became X-Force in the early ‘90s) or of X-Force itself, so naturally I wasn’t sure exactly what to expect. Much to my surprise, though, these issues ended up blowing me away. They are by far the best thing about this trade, and might even be reason enough alone to pick it up. The first issue follows the team as they hitchhike across the country in the wake of having left the X-Mansion for good. By the second issue, they’ve made their way to a Woodstock-esque desert festival, which ends up giving way to unexpected romantic developments and a fight with a mysterious enemy. The character development in these issues is so fantastic that, despite my previous unfamiliarity with the series, I felt entirely invested in what was happening to the cast by the end. If Marvel ever sees fit to collect this creative run again (call the series X-Force Visionaries: John Francis Moore, perhaps?), I’ll be first in line to pick up the trades.

The X-Force issues are arguably the most in keeping with the “road trip” theme, but the final two issues – one a 1994 Wolverine story, the other an issue of Uncanny X-Men from 1980 – really don’t fit at all. The Wolverine issue sees the title character being chased by the vampire known as Bloodscream across the snowy wastes of Canada, while the X-Men issue is simply one long flashback retelling of the team’s history up to that point, ending with Cyclops informing Professor X that he’s leaving. In other words, there’s no “road trip” to be found anywhere in these stories at all! And then, of course, there’s a ridiculous six-page story about Wolverine and Hercules fighting each other in a barroom brawl…but honestly, it’s probably best if I don’t go into any more details on that one.

Although most of the stories don’t fit with the theme of the trade, the X-Force issues are so good that it’s hard to write the entire thing off. That being said, you might be better off just buying those issues separately – they can’t be more than a dollar apiece these days. Heck, you could probably buy John Francis Moore’s entire run on the title for less than the cost of this trade. Come to think of it, why not just do that, and leave X-Men: Road Trippin’! in the discount bin where it belongs?