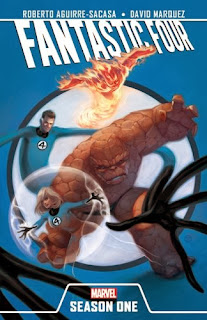 As much as Marvel’s “Season One” graphic novel initiative may seem a shameless attempt to emulate the success of DC’s “Earth One” graphic novels, the first book in the series, Fantastic Four: Season One, also happens to be a surprisingly well put together comic. Designed with both new and older readers in mind, the book tells an updated version of the Fantastic Four’s origin story – probably the most thematically coherent one, in fact, since the Lee/Kirby original.

One of the main differences between “Earth One” and “Season One” is that the marketing for the latter has focused much more on the characters than on the creators involved. Writer Roberto Aguirre-Sacasa is no stranger to Marvel’s original team of superheroes, though, having written a handful of issues of the main series and its short-lived Marvel Knights spin-off back in the mid-2000s. Here he does probably the best work he’s done with the characters since Marvel Knights’ earliest issues, wrapping some of the most established plot devices from Fantastic Four history – cosmic rays in outer space, giant monsters attacking New York City, the Thing temporarily reverting to human form (only to choose to become the Thing again, to save his teammates) – into a fairly cohesive narrative.

It helps that Aguirre-Sacasa hits just the right notes with several of the characters – the Human Torch and the Thing, in particular – to give the story a fittingly light-hearted tone. This sense is greatly enhanced by the art of David Marquez, who takes clear inspiration from the work of Kevin Maguire, especially in the realm of amusing facial expressions. The book is saturated with light blues and greens, provided by colorist Guru eFX, with most of the action taking place in broad daylight. It’s a nice diversion from the darker color palettes used in so many superhero comics these days.

But the book isn’t without problems. The reason given for the team’s doomed space flight is that Reed Richards wants to fly “the first privately-owned, privately-financed, privately-designed, privately-launched, utterly rogue rocket ship.” Although Reed insists that “proving himself” in this way is a means to an end – space tourism, he argues, will eventually subsidize the rest of his scientific work – such a hubristic display of power doesn’t really square with Aguirre-Sacasa’s otherwise unfailingly humanitarian portrayal of the character. Reed plays the role of absent-minded professor here; his ego doesn’t even approach the level at which it’s been portrayed over the last several years in other Marvel comics. Reed the businessman has been done, and done more convincingly, by Aguirre-Sacasa himself – especially at the beginning of the Marvel Knights series (in which the Fantastic Four go bankrupt).

The book shifts focus in a major way about halfway through. Having gained their powers and defeated the Mole Man in the first half, the team goes on to face Namor the Sub-Mariner in an updated version of the events of Fantastic Four #4. The book ends without completely resolving this subplot (Namor is captured and held prisoner in the team’s headquarters), leading me to wonder whether this was originally meant to be an ongoing series or miniseries, rather than a standalone graphic novel. Aguirre-Sacasa also introduces a new female character, Reed’s lab assistant Alyssa, who serves both as the manager of the team and as a secondary potential love interest for Reed. Her inclusion is to the author’s credit – his Susan Storm lacks much of a presence, and Alyssa provides a surprisingly multidimensional feminine voice. It’s a shame that her only appearance is in this book.

It’s unclear whether Fantastic Four: Season One is intended to be the characters’ “official” origin story from here on out, or if it’s just meant to be another version among the many others already out there. The fact that Marvel pads out the book’s length by reprinting the first issue of Jonathan Hickman’s run on the main (i.e., canonical) Fantastic Four series makes me lean toward the former, although it doesn’t really matter either way – Season One is a book that, in spite of its flaws, works as a standalone retelling of a familiar story.
Posted by Marc at 10:45 PM