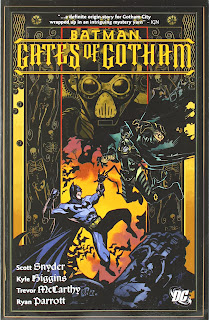 Batman: Gates of Gotham, originally published by DC Comics as a five-issue miniseries in 2011, may be the most flagrant attack on creator rights that I have ever seen in a mainstream superhero comic. From beginning to end, its cast of characters enacts a corporate-fantasy version of the struggles over creative ownership that have rocked the comic book industry in recent years, with creators and their supporters effectively condemned, in the end, as mentally unstable individuals whose actions are tantamount to ideological terrorism.

Gates’ story is partially told through flashbacks to the 19th century narrated via the diary of Nicholas Gate, an architect who, along with his brother Bradley, designed and built much of Gotham City. The story of the Gate brothers bears striking resemblance to the well-known partnership of comic book writer-artists Joe Simon and Jack Kirby (who together created Captain America), as well as to that of Jerry Siegel and Joe Shuster, the creators of Superman. Not only are the Gates, like those real-life writer-artists, the impoverished sons of immigrants, but their initial place of work, with its crowded artists hunched over drawing boards, visually recalls the Eisner-Iger comic book studio in which Simon and Kirby began their careers. Furthermore, just as Simon/Kirby and Siegel/Shuster saw their creations come to life through the financial backing of Timely Comics and National Comics, respectively, so the Gates aspire to work for the individual whose wealth will facilitate the achievement of their artistic vision: “we approached Mr. Wayne with several drawings – drawings for our Gotham. Which we proposed to make his Gotham,” Nicholas says.

Also like Simon/Kirby and Siegel/Shuster, Nicholas Gate eventually has a falling out with the men who have thus far commissioned his work. The difference is that, in Gate’s case, this falling out occurs not over an employer’s refusal to return original artwork or to give financial compensation where creative credit is due, but over the mysterious death of his brother, which Nicholas believes to have been murder. He accuses one of his wealthy patrons, Cameron Kane, of being behind Bradley’s death, and as a result he loses the financial support of his employers. Gate’s suspicions are never confirmed and are therefore cast into permanent doubt – unlike in Kirby’s case, for example, in which Marvel's refusal to return original artwork was admitted openly by the company.

If Nicholas Gate at first seems to represent the archetypal “wronged creator,” though, then the second half of Gates of Gotham is a character assassination of that archetype. Following his brother’s death, Gate is portrayed first as hopelessly naive when he tries to convince Alan Wayne that foul play is involved, and later as a madman when he attempts to murder Cameron Kane in revenge; he ends up killing Kane’s son Robert instead. At the end of the story it is revealed that Nicholas was subsequently locked away at Arkham Asylum. Thus, for questioning the way he is treated by his employers and expressing his anger towards them, the book declares him insane.

There is metonymic significance, too, in the names of Gate’s antagonists. Although it may be tempting to dismiss the naming of one character after Batman “creator” Bob Kane as merely an in-joke, in view of the rest of the book’s position toward comic book creators it can hardly be overlooked. Nicholas’s murder of Gates’ Robert Kane is the act that “proves” the book’s argument: that creators who retaliate against their employers do so carelessly, vindictively, and without legitimate basis. That argument is made even more troubling by its invoking of the real-life Bob Kane – a man who continues to receive sole credit for Batman’s creation, despite the fact that the most familiar elements of the Batman mythos (apart from the name) were created by Bill Finger and Jerry Robinson. In Gates’ corporate-fantasy characterization of comic book creators, the murder of Robert Kane marks an “end of the innocence” not unlike that which took place after the death of the real-life Bob Kane: in the years since the truth of Batman’s creative origins became common knowledge, moral and legal questions about the way publishers treat creators have become significantly more complicated. It is not hard to imagine the leadership at a company like DC yearning for simpler times, but the way that sentiment is transcoded in Gates of Gotham, whether intentionally or not, is deeply troubling.

The same themes pervade Gates’ present, in which a terrorist calling himself the Architect is attacking bridges and skyscrapers built by the Gate brothers and owned by the prominent families that had supported their work. The Architect wears a steampunk-influenced diving suit, which Batman discovers had been worn by the Gate brothers and their employees during the underwater construction of their largest bridges. Based on this connection, it requires no great leap to understand the Architect’s actions as “revenge” for the wrongs perpetrated against Nicholas Gate over a century earlier. The Architect’s rhetoric is filled with hatred for Gotham and its wealthiest citizens, who he calls “liars and thieves,” and he accuses Batman of being a “traitor” even as he tries to blow up Gotham’s bridges with Semtex. If, as I have argued, Nicholas represents the archetypal “wronged creator” reimagined as an angry lunatic, then the Architect is the struggle for creator rights reimagined as literal terrorism.

The story’s only real mysteries are who the Architect is and whether Bradley Gate was actually murdered. While the latter question is never answered, the Architect is revealed to be a character named Dillon May. May is identified at first simply as a “collector” (what he “collects” is never explained), but in the final issue he is also exposed as a descendant of Nicholas Gate. With this move, Gates effectively conflates the two groups most prominently involved in the struggle for creator rights – longtime comic book readers (“collectors”) and the families/heirs of those creators – into an undifferentiated, self-deluded mass. The fact that Batman declares he will defeat the Architect “by proving everything he believes is a lie” underscores the book’s argument and positions its protagonist as an obvious stand-in for companies like DC and Marvel, which have made it their mission to refute even the smallest allegations of wrongdoing made by former employees and their heirs.

But Gates does not stop there, giving Batman these lines at its conclusion: “There are reasons and there are excuses. If it wasn’t his family, he would have found something else to rage over.” There is merit, certainly, to the argument that the most dedicated of comic book fanboys will always be angry about something, but to equate the arbitrary whims of fanboys with the dedicated positions of those who advocate fair terms for writers and artists is insulting. If anything, supporters of creator rights are defined by qualities that directly oppose those of most fanboys: the questions they ask are not “would this or that superhero win in a fight,” but “have Marvel and DC adequately compensated their writers and artists for the fruits of their creations? If not, what is to be done about it?” Batman: Gates of Gotham is little more than an ad hominem attack on the people who would ask these questions, made with as much mean-spirited “rage” as the antagonist it so doggedly seeks to vilify.
Posted by Marc at 4:10 PM