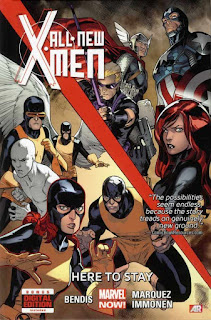 All-New X-Men, Vol. 2: Here to Stay delivers on the promise of the series’ first volume with a story that, even more so than Vol. 1: Yesterday’s X-Men, prioritizes character development over plot. In fact, this volume represents some of writer Brian Michael Bendis’s strongest character work in years.

There is forward plot progression, to be sure, with Mystique gathering the villains Sabretooth and Mastermind for a crime spree that comes to a head in the next volume. But the real star of Here to Stay is the series’ time-displaced version of Cyclops, who wastes little time, following the events of Yesterday’s X-Men, in stealing Wolverine’s motorcycle to search for answers about his present-day self. As one might imagine, this makes for an amusing series of misadventures in which Cyclops comes to grips with the modern world as Wolverine tries to track him down.

The first two issues of Here to Stay, beautifully illustrated by guest-artist David Marquez, culminate in a conversation between Cyclops and Mystique (who this young version of Cyclops has never met). Mystique acts as something of a sounding board for Cyclops at first, allowing him to talk through the major events of Yesterday’s X-Men and granting readers the clearest access to his thoughts that we’ve had so far. But what makes this sequence most interesting to me is that it can also be read as a total inversion of Bendis’s much-celebrated Ultimate Spider-Man #13, in which Peter Parker comes out as Spider-Man to Mary Jane Watson (who, prior to this issue, thought Peter’s big secret was that he had a crush on her). The same honesty that characterized that conversation initially seems present here as well, with an empathetic-looking Mystique offering seemingly thoughtful advice to the angst-ridden Cyclops. Bendis turns that perception on its head, though, in the very next scene: 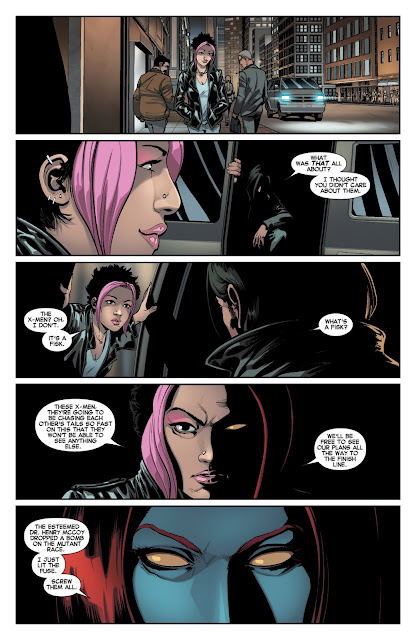 It’s a pretty surprising moment given the nature of the conversation that’s just taken place, and again, it strikes me as a particularly clever twist for those with an affinity for Bendis’s previous work.

The time-displaced Jean Grey develops in interesting ways here too, with the ethics of her newly acquired mind-reading powers brought repeatedly into question. The other three original X-Men – Beast, Iceman, and Angel – are given a lot less to do this time around. Angel in particular feels like a dead weight on this series, and despite a tedious subplot in which he fights generic Hydra robots alongside his present-day counterpart, his only real function here is to have his thoughts questionably manipulated by Jean. And while I’m not confident that the plot development teased by this volume’s cliffhanger ending – Angel’s departure from the Jean Grey School for the present-day Cyclops’s New Xavier School (and, thus, for the series Uncanny X-Men) – will make the character any more compelling or relevant, the prospect of a slightly decluttered cast in All-New X-Men is a hopeful one.

One final thing I couldn’t help but consider as I read these issues is exactly when Bendis proposes the original X-Men to have been formed. All signs seem to point to the late 1980s: the young Cyclops is baffled by cell phones and water bottles, and there are repeated references to the present-day Cyclops being around 40 years old while the younger version “looks twelve” (although I suspect he is closer to sixteen). For two and a half decades to have transpired since the formation of the X-Men contradicts the (frankly stupid) principle of Marvel’s “sliding timeline,” which would have us believe that all the events of the modern Marvel Universe have taken place over the course of less than ten years.

Here to Stay may lend some credence, then, to a theory advanced by Rich Johnston: that Marvel editorial at one point was purposefully seeding such continuity aberrations in order to justify a future “quarantine” of the X-Men and Fantastic Four franchises – the Fox-controlled film rights of both being the subject of much dismay among top executives at Marvel and Disney – from the rest of the Marvel Universe. It’s impossible to render a verdict based on the issues collected here, of course, but it’s something I’ll certainly keep in mind as I continue to read this series.
Posted by Marc at 3:45 PM