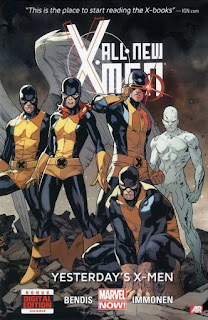 All-New X-Men, Vol. 1: Yesterday’s X-Men is one of the most compelling superhero time-travel stories in years. The X-Men have featured in more than a few such storylines over the last several decades, with a staggering number of the franchise’s major characters hailing from one alternate future or another. It’s become quite a lot to try to keep track of, and it wouldn’t be inaccurate to characterize X-Men continuity, at this point, as being just shy of impenetrable. In All-New X-Men, though, writer Brian Michael Bendis scales back the onus other writers have often placed on the reader by effectively reversing the conventions of the typical X-Men time-travel story. The series makes no demands of us to keep track of alternate pasts, presents, and futures; the dystopic world it takes as its subject is our own.

The book’s high concept is that the Beast, in an effort to show a newly militant Cyclops the error of his ways, has brought the original five X-Men from the past to the present day. Much of the story takes place from the viewpoint of the time-displaced X-Men, thus casting a spotlight on just how far afield the franchise has come from those early issues by Stan Lee and Jack Kirby. To the original X-Men, in fact, their present-day incarnations are often entirely unrecognizable – literally so, in the cases of Iceman and the Beast – with the notable exception of Jean Grey, who in the present has been dead for quite some time. The original Jean thus takes on an almost messianic quality in the eyes of several characters, including Storm, Wolverine, and Kitty Pryde – all strangers to this Jean, as they weren’t introduced until years after Lee and Kirby left the original series. Wolverine is especially affected by Jean’s “return,” and perhaps as a result his relationship with the time-displaced X-Men is the most vexed of any of his peers.

And while the young Cyclops’s showdown with his present-day self serves as the book’s climax, it may be Warren Worthington, the Angel, who ultimately inspires more pathos than any other character in Yesterday’s X-Men. While Bendis doesn’t give him a lot to do in this volume, Warren effectively closes the book with perhaps the most heartbreaking lines imaginable in a story so obsessed with the disparity between past and present: “No one is mentioning me. No one is talking about what has happened to me, Bobby. Where am I?” Although the dramatic irony of Warren’s question will be lost on those unfamiliar with the events of Rick Remender’s Uncanny X-Force, the overall effect is still to underline how unsettlingly bizarre the world of the X-Men has become in recent years.

This volume’s only real weakness is that the original X-Men don’t get much face-time for the first few issues it collects, which focus more on the present-day Scott Summers and his efforts to establish a team of new mutants. As such, we get various de facto origin stories for new characters taking up space in a series ostensibly focused on the five original X-Men, and as a result we don’t see much of our protagonists until about halfway through the book. Bendis is setting up in these first few issues for his run on the rebooted Uncanny X-Men, which centers on Cyclops’s new team and began just a few months after All-New X-Men. Why that series couldn’t have just launched concurrently with All-New in order to give the original X-Men more time to develop on their own is anyone’s guess.

But the real issue that arises from Cyclops’s presence in Yesterday’s X-Men is that it undermines one of the book’s central premises: that what Cyclops is doing is terrible enough to warrant the Beast’s mucking about with the timestream in order to stop him. In point of fact, though, the Cyclops we encounter here seems pretty darn reasonable; while he engages in violence against “normal” humans with some frequency, he does so without killing anyone and only in order to save the lives of otherwise defenseless mutants. Thus, while future volumes in this series will see the characters of All-New X-Men come to view Cyclops with a greater degree of complexity, for the time being their opposition to Cyclops seems pretty thinly motivated.

Like many recent Marvel collections, Yesterday’s X-Men utilizes the company’s “Augmented Reality” app, which allows smart-phone users to access extra content by scanning obnoxious-looking red boxes littered throughout the book. This isn’t the first collection I’ve encountered with this “feature,” but it’s one of the more shameless in its execution. In one scene, Kitty Pryde prattles on about her concern for the Fantastic Four when they don’t answer her phone call; the panel’s “AR” box, when scanned, takes the reader to a minute-long advertisement for Matt Fraction’s Fantastic Four and FF series. It’s one thing to do a little tongue-in-cheek cross-promotion via editorial captions – a tradition inaugurated by Stan Lee himself in the early Silver Age – but it’s another to present such content as “bonus material” that adds value to a book. (Lest we forget, it wasn’t so long ago that collections like this cost a whole five dollars less.)

These criticisms aside, All-New X-Men is certainly one of the more interesting and original series to come from Marvel as of late. Despite the time-travel hook, Bendis seems committed to focusing on characters more than making a further mess of X-Men continuity, and for that reason alone I’ll be paying attention to where this series goes.
Posted by Marc at 5:30 PM