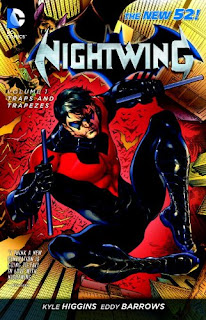 If Scott Snyder’s aim in Batman, Vol. 1: The Court of Owls was to revise Batman franchise history at the macro level – by introducing the idea that Gotham City could be controlled for decades, without Batman’s knowledge, by a secret society of criminals – then Nightwing, Vol. 1: Traps and Trapezes operates at the opposite extreme. It revises franchise history at the micro level, by exploring the relationships between Nightwing (Dick Grayson) and several new characters with ties to his circus roots. The book’s strength lies not in its revelation of major “secrets,” but rather in its supporting cast members and the catalyzing effect they have on the main character.

The most interesting of the new characters is Raya, a redheaded woman who looks strikingly like Dick’s on-again/off-again love interest, Barbara Gordon. When Haly’s Circus returns to Gotham City and Dick sees Raya for the first time since his parents’ death, sparks fly between them instantly. (The book insists, ridiculously, that Dick’s parents were killed five years ago, which would make Dick around 19 or 20 years old – despite the fact that he and Raya are clearly portrayed as being in their mid- to late twenties, at the youngest.) In this respect, Traps and Trapezes is the polar opposite of a book like Batman: The Dark Knight – Golden Dawn, which does a comparatively poor job of retrofitting a new character into the history of an established one. Golden Dawn’s greatest flaw was that, for all its efforts to play up Dawn Golden’s importance to Bruce Wayne in scenes set during their childhood, her characterization in the story’s present was positively nonexistent. Where Traps and Trapezes succeeds, by contrast, is in its making Raya an integral part of the story’s forward momentum, rather than dwelling on her and Dick’s past relationship.

The fact that Raya has little in common with Barbara Gordon, apart from her looks, is an important element to the story. Their differences are underscored when Barbara guest-stars (as Batgirl) in the book’s fourth issue; whereas Raya teases Dick about fairly mundane topics (his never having seen The Godfather, for example), Barbara is more interested in Dick’s feelings and emotional well-being. Although Dick seems to think he’s happy with Raya, there’s an obvious distance behind her beauty – even before the story’s reveal that she is reluctantly helping Saiko, a mysterious assassin who serves as the book’s primary antagonist. The story’s focus on Dick, rather than his superhero alter ego, is underlined by the fact that Saiko is trying to kill the former; at first, he fails to even realize that Dick and Nightwing are the same person. In this sense Saiko is fairly analogous to the antagonist of Court of Owls, who initially hunts Bruce Wayne, not Batman.

The similarity of the threats Batman and Nightwing face in these two books is revealing in regard to both characters. The most compelling element of Court of Owls is its protagonist’s stubborn hubris – despite mounting evidence, Batman refuses to believe that there could possibly be a secret society at work in “his” city – and that element is largely absent from Traps and Trapezes. Dick whiles away weeks of story time without investigating either Saiko’s attempts on his life or the secret history of Haly’s Circus, despite its being hinted at by several other characters – a very un-Batman-like mode of operations. This is perhaps most surprising because Dick actually took up the role of Batman for a number of recent issues, some of which are collected in Batman: The Black Mirror (which, this book explicitly reminds us, remains within post-New 52 continuity).

In fact, the very point of this story seems to be to differentiate Dick’s crime-fighting methods from Batman’s, and in that respect the characters’ vastly different approaches to problem-solving accomplish the task. Traps and Trapezes ends with Dick’s repudiation of the nostalgia that fuels the very ethos of Batman’s mission: “We’re not defined by our tragedies or our turning points,” he thinks as he speeds away from the Batcave on his motorcycle, “we’re defined by the choices we make in the face of them.” If Batman’s war on crime is motivated by revenge, then, it would seem that Dick’s isn’t so much “motivated” at all as it is simply reactionary.

Although writer Kyle Higgins establishes Batman’s fixation on the past as problematic, he resists portraying Dick’s approach as faultless by comparison. It’s the character’s inattention to the past, in fact, which brings about so many problems in the present and keeps him relatively in the dark until Saiko conveniently explains himself in an expository info-dump near the story’s end. And then there’s the final scene, in which Dick angrily confronts Bruce Wayne in the Batcave only for Bruce to lay him out with a single punch. (The same scene also appears, from Bruce’s perspective, at the end of Court of Owls.) There’s more to Bruce’s actions than a lack of anger management – by punching Dick, he knocks out a tooth embedded with an alloy which would have transformed Dick into a mindless killer – but his methodology is disturbing, and Dick’s unquestioning acceptance of it is enough to indicate that he has yet to separate himself fully from the ways in which Batman traditionally operates.

The fact that this is the only scene in the book in which Bruce Wayne actually appears doesn’t help; more interaction between Dick and Bruce throughout could have given the scene more impact for both characters and made for a more thematically coherent climax. It’s not the plot’s only misstep, either – about halfway through the book, the story comes to a grinding halt with a ridiculously out-of-place issue about a rhyming demon who comes for the soul of a circus clown. It’s unclear at this early point in the series whether plot developments like this one are actually laying the seeds for future stories, just as it’s hard to tell whether the shakiness of Dick’s outlook toward his crime-fighting career is a character flaw Higgins plans for him to work through in future volumes, or just the result of lazy writing. Traps and Trapezes has enough strengths, though, that I look forward to searching out the answers to those questions in the next volume.
Posted by Marc at 1:00 PM