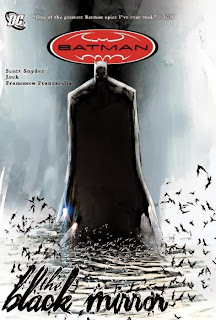 Batman: The Black Mirror collects the entirety of writer Scott Snyder’s run on Detective Comics (first published just prior to DC’s line-wide “New 52” relaunch in 2011) with artists Jock and Francesco Francavilla. As such, it is one of the longest – and, I believe, the final – creative run to feature former sidekick Dick Grayson, and not Bruce Wayne, as Batman.

The book’s main plotline has to do with James Gordon (the murderous son of Commissioner Jim Gordon), who returns to Gotham with shadowy intentions after several years’ stay in a mental institution. Despite the fact that the series these stories were published in is titled Detective Comics, there is fairly little detective-work, or even mystery, involved in exposing James’s true motives. In fact, The Black Mirror is more a horror story than anything else, and it trades on a theme that has characterized some of the best works of the horror genre since the late 1960s: the notion that today’s monsters emerge not from somewhere “out there,” but from within the apparently normal, all-American family unit. Furthermore, James conforms to this archetype by specifically targeting his own family for destruction. His father and his sister Barbara, in turn, come to view James as an irredeemable force of evil that must be stopped at all costs.

Less interesting than this plotline are the several shorter ones that precede it, which involve the daughter of the man who killed Dick Grayson’s parents and a criminal organization that auctions super-villain paraphernalia. These issues are drawn by the artist Jock, and while his linework is perfectly competent, it pales in comparison to the colorful energy of Francavilla, who illustrates most of the material featuring James Gordon. Still, there is something at least a bit refreshing about the pace of the book’s plot development, which hearkens back to an era before “writing for the trade” was as prevalent as it is today. Elements of the James Gordon story are intermittently seeded throughout the other arcs, building suspense for Snyder’s big finale.

It would be inaccurate, though, to say that all of the smaller stories come together neatly in the end. Snyder tries to have it both ways by having James reveal himself, in a long-winded final monologue, not just as the psychopath his family has suspected him of being all along, but also as the mastermind behind all the conflicts Batman has faced in the previous ten issues. The reveal falls particularly flat when Snyder attempts to position James and Dick as dramatic foils, with James having somehow known, all along, that it was Dick under Batman’s cowl. Although James has appeared in Batman comics before, Snyder essentially treats him as a new character here, leaving any history that might justify his malice toward Dick unexplained.

The book also tries, but fails, to make the argument that Gotham is a “city of nightmares” which corrupts everything (and everyone) it touches. The trouble is not just the fact that this theme is never quite addressed head-on – there are only a few narrative captions and exchanges between Dick and Commissioner Gordon that allude to it – but that it directly clashes with the one theme the book develops most fully. For the James Gordon subplot to work (and it mostly does, up until his final monologue), James’s “evilness” must emerge from that unlikeliest of places: a loving, “normal” home. But for his evil also to be the cause, somehow, of Gotham itself (and for his ultimate plan to be the poisoning of Gotham’s infants with a drug that will supposedly make them sociopaths like him) totally confuses the book’s message. The Gotham-as-excremental-city theme is one Snyder will return to, in both Batman: Gates of Gotham and Batman, Vol. 1: The Court of Owls, but here it remains under-developed and at odds with the rest of the book.

Dick’s starring role makes for a few narrative innovations, the major one being that Batman now works with a support team composed of Tim Drake (Red Robin) and Barbara Gordon (the former Batgirl). However, this turns out to be little more than a slight cosmetic change. Dick’s radio contact with the others always seems to drop out at the first sign of danger – making him as much a loner, when it really comes down to it, as Bruce Wayne ever was. Dick is also Bruce’s preternatural equal in matters of technology and forensics, removing much of the naiveté we might expect from a young, inexperienced Batman.

Franchises as big as this one must always revert to square one eventually – in fact, Gates of Gotham, published concurrently with The Black Mirror, ends with Bruce telling Dick that he will soon be returning to Gotham – so it’s too bad that Snyder passes up the opportunity to do something significantly different with Batman here. In the end, Dick doesn’t have any adventures that Bruce couldn’t have had, and he doesn’t go about resolving conflicts much differently either; even the conflict with his primary antagonist is weighed down by run-of-the-mill super-villainy and a genuinely incoherent combination of themes. Although the artwork, especially Francavilla’s, often seems to leap off the page, this is a story that could otherwise probably best be classified as “business as usual.”
Posted by Marc at 12:00 PM