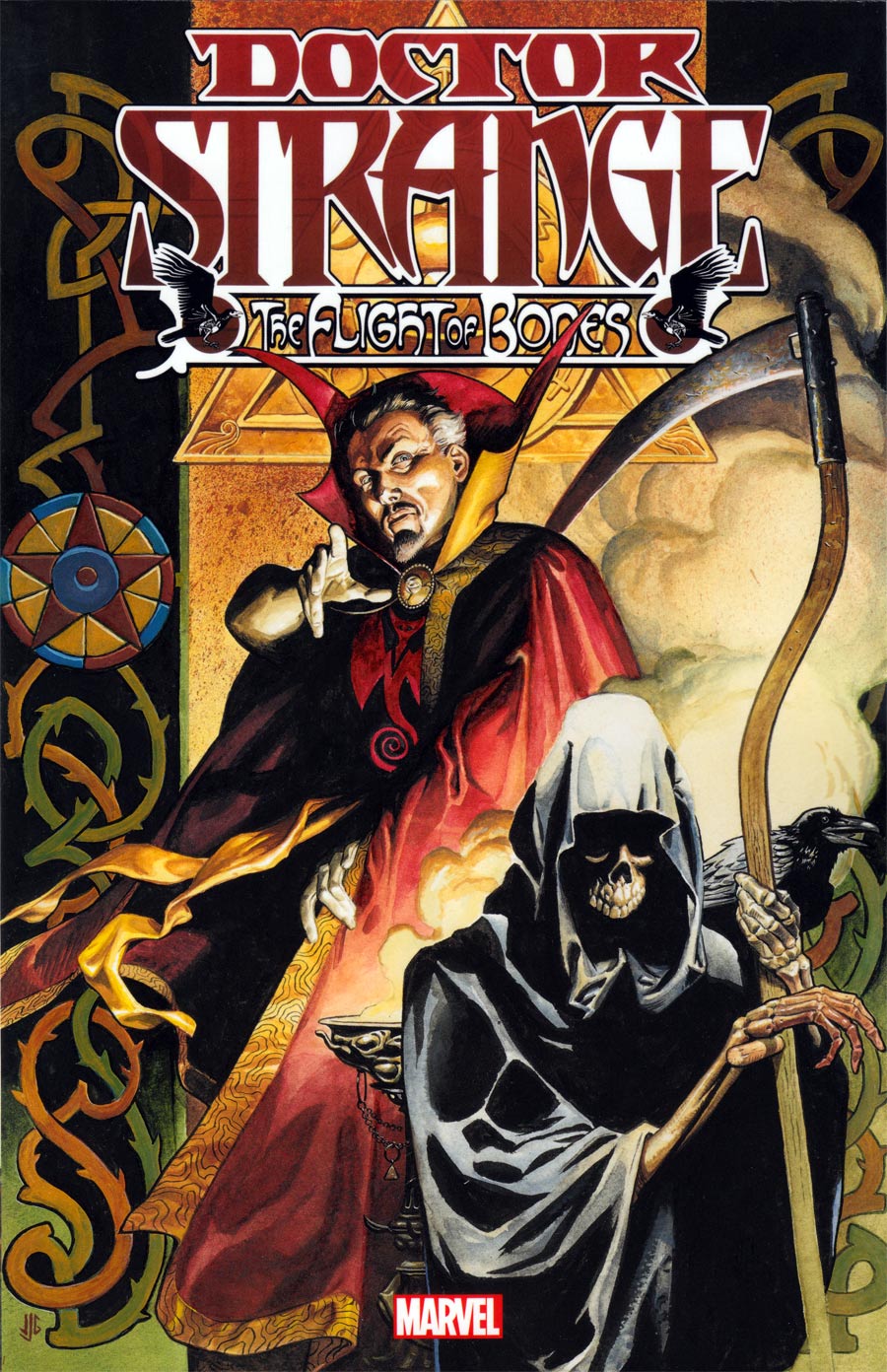 My main interest in reading Doctor Strange: The Flight of Bones, which collects Doctor Strange’s short-lived Marvel Knights series from just before the turn of the millennium, was in seeing a mid-Starman Tony Harris drawing one of my favorite low-profile Marvel characters of the time. (It would be another ten years before a Doctor Strange movie was even rumored, and almost ten more before that movie was actually released.) I had always assumed that Harris also wrote these comics, since I’d never seen any other name mentioned in relation to them. I wasn’t completely wrong – Harris does receive “story” credit, along with actual scripter Dan Jolley and inker Ray Snyder – but he’s actually gone by the series’ halfway point, replaced by Paul Chadwick of Concrete fame. One can only speculate on what could have happened behind the scenes to cause Harris to abandon a four-issue miniseries after drawing just two issues, but the result, at any rate, is that Jolley is left holding the bag with a story that never really comes together.

Jolley’s writing isn’t bad, but he mostly seems to be doing damage control for a series that’s clearly gone off the rails. There are so many out-of-left-field narrative choices, even before Harris’s departure, that it’s difficult to imagine the final version of Flight of Bones as being at all similar to the series originally proposed. One is the jarring introduction of a third-person narrator halfway through the first issue, which is all the more baffling given that we see Strange dictating his thoughts to a magical, self-recording diary just a few scenes later. Would interspersing the story with first-person diary excerpts not have been a more engaging way of granting the reader access to Strange’s thoughts – and a cleverer one, too, given the diary’s presence as a physical artifact in the story? I also wonder at the choice to fill out Strange’s supporting cast with an obscure character named Topaz, a young woman who apparently featured in the 1970s horror title Werewolf by Night and a handful of issues in Strange’s first two ongoing series.

But the biggest head-scratcher is the total abandonment of the religious motifs that arguably define the first half of the series. Harris frequently intercuts the action of his two issues with Christian imagery – crosses, stained-glass windows, gargoyles, and gothic spires – that juxtapose (in a quite novel way for a Doctor Strange comic) the character’s simultaneous devotion to the occult and his non-belief in a Christian God. At one point Topaz even asks Strange about his religious beliefs, and Strange equivocates in a way that’s clearly meant to be revisited later in the story. That never happens, though, and the second half reveals that the apparently religiously motivated crimes of the series’ first half were all the work of a mind-control plot by Strange’s perpetual nemesis Dormammu. Following the reveal is an extended fight sequence in which Strange and Dormammu spout uncharacteristic quips and one-liners, making it clear that Jolley and company are just vamping for page length at this point.

Could the series’ intended interrogation of Christian belief have seemed simply too controversial to the series’ editors, inspiring last-minute changes that drove Harris from the title? (It seems unlikely that Jolley, Harris, and Snyder would have had a change of heart about the subject matter, given their future work together on the even more explicitly religious-themed Obergeist.) If so, the situation would be in keeping with that of Kevin Smith’s Daredevil: Guardian Devil – the very first story arc published under the Marvel Knights imprint, and one I’ve always suspected of editorial interference given its bizarre eleventh-hour plot turn, in which the apparent Second Coming of Christ is explained away as an illusion created by the Spider-Man villain Mysterio (who proceeds to commit suicide before any questions can be answered).

This collection is rounded out by a hodgepodge of Doctor Strange stories from various anthology titles, all by different creators, including such luminaries as Christopher Golden and Jim Starlin. The best one is probably the 2010 story by Kieron Gillen and Frazer Irving. Irving’s Doctor Strange was a welcome sight for me: his renderings of the character were by far the best part of his fill-in issues on Brian Michael Bendis’s Uncanny X-Men. Irving’s contribution aside, though, the art in these stories rarely compares to that of Flight of Bones’ first two issues; with its extreme detail, serpentine linework, and resolute portrayal of Strange as a dead ringer for Vincent Price(!), Harris’s work is certainly something to behold. It’s just a shame there’s so little of it to go around.
Posted by Marc at 10:30 AM