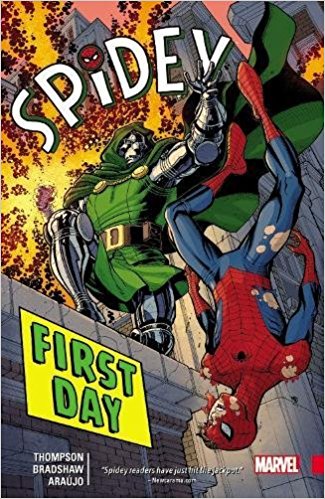 When Spidey was first announced in 2015, it was pitched as “an all-new ongoing series of done-in-one, in-continuity tales set during Peter’s teenage years.” I was excited when the news broke. It had been a long time since a series like Untold Tales of Spider-Man had focused on the early years of the main-Marvel-universe Peter Parker; in fact, it had been a long time since Marvel published a really good creator-driven Spider-Man series not immediately tied to present-day continuity in general. What I expected of Spidey, based on the initial press, was a continuity-lite version of Untold Tales or maybe even something in line with the better issues of Marvel Adventures Spider-Man: a series with recognizably classic versions of the characters we’re familiar with, but without too much historical baggage. Instead, now having read Spidey, I find myself disappointed with a series that deviates significantly from what was promised and, on top of that, seems unable to decide exactly what kind of comic it wants to be.

First of all, Spidey is definitely not set in any kind of established continuity. In this book Peter Parker is being tutored by his high school crush Gwen Stacy (who doesn’t appear in Marvel’s main universe until Peter is in college). He fights a variety of Lee/Ditko-era villains that include the Sandman, the Lizard, and the Vulture, all of whom he’s seemingly met before in this universe; and yet, he hasn’t met J. Jonah Jameson (who first appeared in Amazing Spider-Man #1) or sold a single photograph of Spider-Man by the time the series begins. Instead, apparently, he’s some kind of Internet sensation: “My last Spidey selfie got six zillion likes on Insta,” he proclaims in the second issue. And while being divorced from main-universe continuity isn’t necessarily a deal-breaker, there are already plenty of high-school Spider-Men across a range of media: Brian Michael Bendis’s Ultimate Spider-Man in the comics, Sam Raimi’s and Marc Webb’s versions in the movies, and television shows like The Spectacular Spider-Man and Ultimate Spider-Man (the latter being completely unrelated to Bendis’s comic book, sadly). But what’s most important about that statement is that all of those comics, movies, and television shows are a lot better than Spidey.

Even the two Amazing Spider-Man movies – the latter of which is probably the worst superhero movie I have ever seen – do a superior job of establishing believable characters than Spidey. Each issue (except for #5) begins with the same full-page illustration depicting the character’s origin, but with slightly different text overlaid in each instance. Often, this text establishes the general theme or conflict for the issue. These themes tend to be expressed in the form of some maxim conveyed by Peter’s Aunt May or Uncle Ben. But rather than ever exploring Uncle Ben’s most important shred of wisdom, the one that arguably defines the Spider-Man franchise – “with great power there must also come great responsibility” – the series harps on such banalities as “be yourself,” “never give up,” and “don’t fall down.” Almost every issue ends with Peter cryptically repeating the day’s lesson to Aunt May, who always seems to be either doing the dishes or making dinner. It’s a shockingly regressive portrayal of the character, especially in light of her far less domestic role as a humanitarian aid worker in recent issues of Dan Slott’s Amazing Spider-Man.

Much of the painful simplicity of Spidey’s stories can be forgiven if we read it as simply being geared toward very young children. I’m hesitant to do so, however, mainly because of how thoughtlessly it approaches the subject of Peter’s bullying at school. Throughout the first six issues, Peter is tormented relentlessly by his peers: he is physically attacked, shoved, and spit on. His head is held underwater in a public toilet, and he takes the beatings administered by school jock Flash Thompson in dutiful silence. “I could crush Flash and all his buddies,” he thinks. “But if I do that? I lose the balance Uncle Ben always talked about. I’ll lose it and fall. No more secret identity. Which would break Aunt May’s heart.”

This line of thinking is a downright pathological extrapolation from Stan Lee’s portrayal of the character, in which Peter’s “bullying” mostly took the form of verbal barbs from girls he awkwardly asked on dates. By not using his powers in those cases, Peter was not merely protecting his secret identity; he was also choosing not to use his powers for personal gain or in the service of spite and pettiness. In Spidey, his tacit acceptance of extreme physical bullying represents an uncomfortable refusal to stand up for his own basic dignity as a human being. It doesn’t take superpowers to ask an adult for help or to speak up against the people who make your life a living hell, and Spidey’s failure to recognize that is deeply troubling.

All of that said, Nick Bradshaw’s artwork for the series’ first three issues is genuinely lovely. It’s filled with the kinds of fun details and Easter eggs you might expect of an artist like Mark Buckingham or a Generation X-era Chris Bachalo. The Sandman’s amorphous limbs transcend panel borders, emphasizing the character’s physical uncontainability, and when the Lizard’s minions invade New York City, dozens of tiny reptiles skitter around the panel borders. Bradshaw’s artwork does suffer from an overabundance of two-page spreads, though, which I suspect were designed for (and therefore probably read better in) digital formats; there’s just too much gutter loss in the trade paperback for me to believe that these pages were laid out with a traditional print book in mind.

André Lima Araújo’s artwork in issues 4 through 6 conveys the story well enough, but you can really feel Bradshaw’s absence in these issues, especially since writer Robbie Thompson still seems to be writing for an artist who’s going to supplement a sparse script with tons of visual detail. Araújo just isn’t that kind of artist, unfortunately, and his tendency to draw tiny figures inside huge panels results in a comic that often looks and feels cavernously empty.

In the end, I’m just not sure what this book wants or even is trying to be. If it’s intended to appeal to longtime Spider-Man fans, then why does it tell such juvenile stories in a totally unremarkable new continuity? If it’s trying to convey wholesome lessons for children, then why doesn’t it try harder to establish Peter as a good role model with at least some modicum of self-worth? If it was designed purely as a vehicle for Bradshaw to unleash his artistic talent, then why is Bradshaw gone after the first three issues? And why, ultimately, was this series promoted as something that it so completely is not? Perhaps what’s most frustrating about Spidey is that it seems so blissfully ignorant of these questions in the first place.
Posted by Marc at 9:30 PM