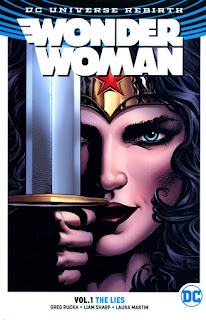 As part of its 2016 Rebirth initiative, DC simultaneously pared down the overall size of its publishing line and doubled down on its most popular characters by shipping two issues of titles like Action Comics, Detective Comics, and Wonder Woman per month. For the likes of Action and Detective, this strategy resulted in well-received initial storylines that wrapped in three months or less and were collected into trade paperbacks almost as quickly. But with Wonder Woman, DC took a more long-form approach: although the series would ship twice per month like the others, issues would alternate between a retelling of the character’s origin and another story set in the present. Each would have a different artist but both would be penned by Greg Rucka, whose return to the character after a ten-year absence was highly anticipated by readers.

Wonder Woman, Vol. 1: The Lies collects the series’ first six odd-numbered issues (and the prefatory Wonder Woman: Rebirth one-shot), which tell the present-day story. I’m not sure why DC chose to publish The Lies as Vol. 1 and the origin storyline, Year One, as Vol. 2, but it’s a testament to Rucka’s talent and sense of nuance that Wonder Woman’s present-day adventures never invoke the feeling of having missed something by not having read the even-numbered issues. This is especially impressive given how emotionally freighted Diana’s relationships are with the two other major characters of The Lies: estranged ex-lover and special-ops soldier Steve Trevor, and best-friend-turned-nemesis Barbara Ann Minerva, alias the Cheetah. That Rucka is able to clearly convey the varying shades of betrayal each of these characters feels toward one another, all despite the deferred recounting of their shared history until Vol. 2, is pretty remarkable.

Indeed, betrayal is the dominant theme of The Lies. The main thrust is that the many different versions of Wonder Woman’s origin that have been told over the years are all hovering at the edges of the character’s memory. She remembers myriad conflicting things she knows can’t be true; she has been “deceived,” she learns by wrapping herself in her own Lasso of Truth, but by whom and for what reason are a mystery. Her relationship with Steve is similarly characterized by years of avoiding the truth, of hurt feelings and self-denial. While Rucka avoids directly criticizing the various creative runs that emerged from DC’s last universe-wide reboot in 2011, Wonder Woman’s rueful explanation of the time she’s spent as Superman’s girlfriend – it was “easy” and “uncomplicated,” she admits – is a telling indictment of just how wrong the last six years of Wonder Woman comics have gotten the character.

The Cheetah’s history is compellingly reimagined as well, although no previous knowledge of the character is necessary to appreciate the contemporary social relevance of her plight. In The Lies, she is the victim of what Steve explicitly refers to as “toxic” masculinity: that is, as the victim of a pagan god’s jealous curse against her for having had relationships with other men before marrying him. (This is a much more meaningful take than the one presented in the 2011-launched New 52 Justice League series, in which Barbara Ann is a one-note career criminal who willingly becomes the Cheetah to better advance her illicit ends.) Her relationship with Diana transcends any tedious “but we were friends!!”-type handwringing in this volume, as the two work together to restore Barbara Ann’s humanity in their communal search for answers about the past.

Artist Liam Sharp deserves a great deal of credit for the emotional resonance of The Lies. Sharp has come a long way since the early issues of Spider-Man’s Clone Saga (where I first encountered his work), having turned in recent years more toward illustration, painting, and the fantasy genre. He brings those eclectic influences with him in his return to mainstream superhero comics: his Wonder Woman is powerful and beautiful without the uncomfortable hint of exoticism; his bearded Steve Trevor, although intensely handsome, clearly carries himself under the weight of years of physical and emotional tribulation; his Cheetah, lithe and feral, would have made Frank Frazetta proud. The nearly wordless rapprochement between Diana and Steve, their silhouettes black against the setting sun, is one of the most movingly honest and beautifully rendered scenes I’ve read in some time.

DC and its fans were right to herald Rucka’s return to Wonder Woman as perhaps Rebirth’s greatest creative coup: he and Sharp are currently turning out what may well be the publisher’s best series at the moment. I can’t wait to take the trip back to Year One in the series’ next volume, and to see how Wonder Woman’s even-numbered issues complement the story told in The Lies. And I look forward to Sharp’s return in the upcoming third volume as well, in which his vivid artwork and Rucka’s clear-eyed writing are sure to illuminate the path on Wonder Woman’s epic search for truth.
Posted by Marc at 1:30 PM