Review: Aquaman: A Celebration of 75 Years 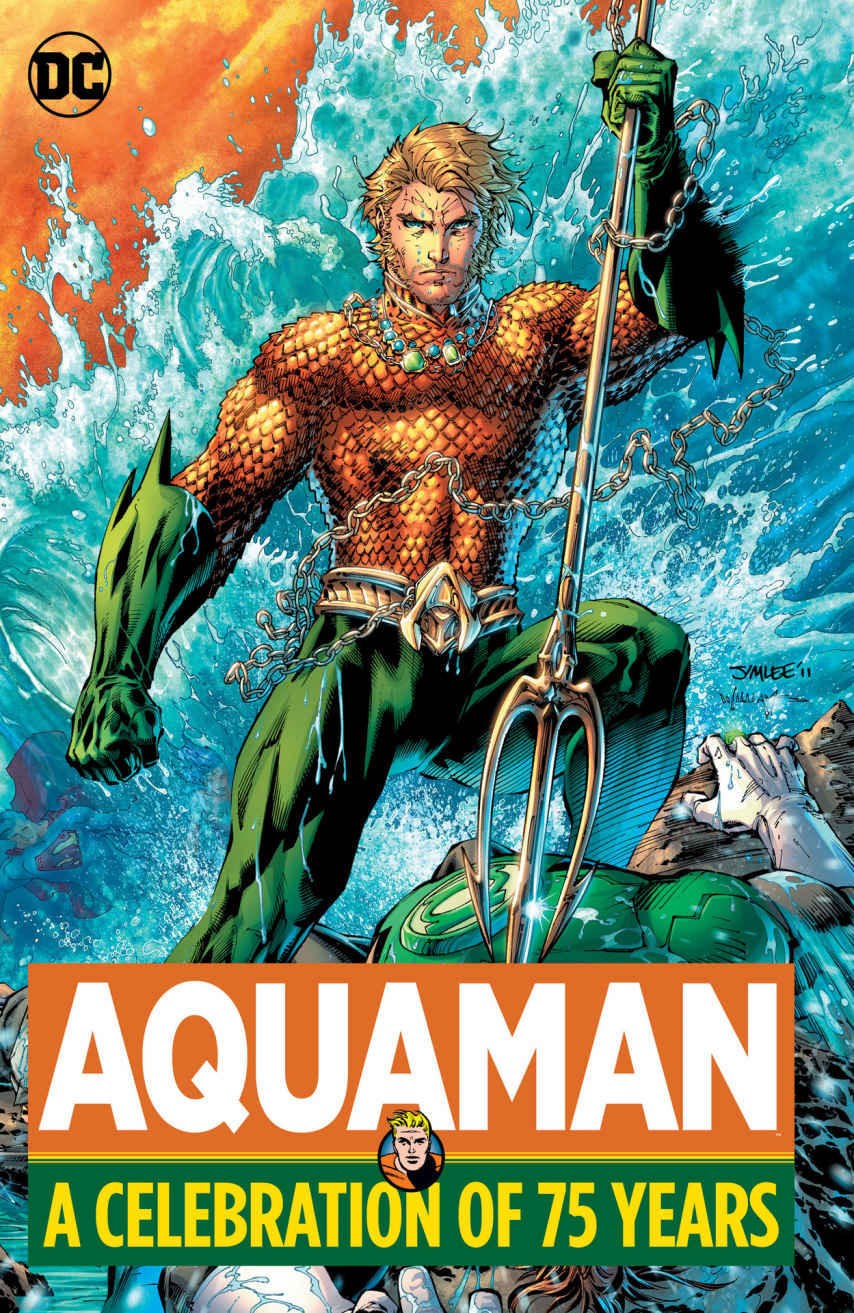 Aquaman: A Celebration of 75 Years is the thirteenth hardcover DC has released under its “Celebration of 75 Years” banner, and while the series has been generally well put together as far as these types of entry-point anthologies go, this is the first one to mark a truly historic publishing event. That’s because Aquaman has been so sparsely collected over the years that a history-based anthology featuring the character was essentially bound to include material never collected before (if only to live up to the “75 Years” part of its moniker). Sure enough, in fact, this book does an exceptional job of curating a range of previously uncollected material from across the character’s entire publication history.

Prior to this collection’s release, reprints of Golden Age Aquaman stories were especially few and far between. The character first appeared in 1941, in More Fun Comics #73 (which also, interestingly, featured the first appearances of Green Arrow and his sidekick Speedy, in a different story). More Fun being an anthology series, Aquaman appeared as a 7- to 10-page feature until #107 in 1945, at which point Aquaman and the other superhero features were moved to Adventure Comics starting with 1946’s Adventure #103. The first and only entry in DC’s Aquaman Archives hardcover series begins with 1959's Adventure Comics #260, meaning that until now, nearly eighteen years’ worth of Golden Age Aquaman stories have gone completely uncollected. (Aquaman was one of the few superheroes – along with Superman, Batman, and Wonder Woman – to be published continuously throughout the 1940s and ’50s.)

Naturally, Aquaman’s first appearance from More Fun #73 is also the first story of this collection; it's been collected a handful of times before, though not in quite a few years and never previously with the same quality of restoration. My own exposure to Aquaman has been mostly with the brooding incarnations of recent years, so I was surprised by how cheerful and quippy this early version of the character was by comparison: “See the sea, my friend!” he quips in his very first line, kicking a Nazi soldier over the railing of a submarine deck.

Even more interesting are the newly reprinted stories from More Fun #89 and Adventure Comics #120, #174, and #220. They're all of the 7- to 10-page variety, and they’re each a lot of fun. Perhaps the best of these is “Aquaman Goes to College” (1947), which sees Aquaman headed to school for formal training on the creatures he lords over as self-appointed “sovereign of the sea.”

However, he quickly dismisses his studies when he hears that the school will lose its funding if the swimming team doesn’t win its next competition. When the coach marvels at Aquaman’s ability to hold his breath for fifteen minutes underwater, the hero is amusingly frank: “The explanation is simple, coach…you see, I’m Aquaman! But, I’m a bonafide student, so I’m eligible for the team!”

Throughout the Golden Age stories, Aquaman is so cavalier about his superhero identity that I can’t help but wonder if the writers were intentionally parodying characters like Batman and Superman – both of whom, in the Golden and Silver Ages, went to absurdly complicated lengths to maintain their secret identities. One way or the other, the particular stories selected for this volume draw attention to the general ambivalence of Aquaman’s early writers toward the character’s origins. In his first appearance, the character explains in a three-panel flashback that both of his parents were human: his father, a “famous undersea explorer,” taught him to “live under the ocean” by scientific means. But the comically abrupt end to his tale (“That’s all of the story,” he says, running off) suggests countless unanswered questions that Aquaman’s writers would spend the next 75 years trying to address. 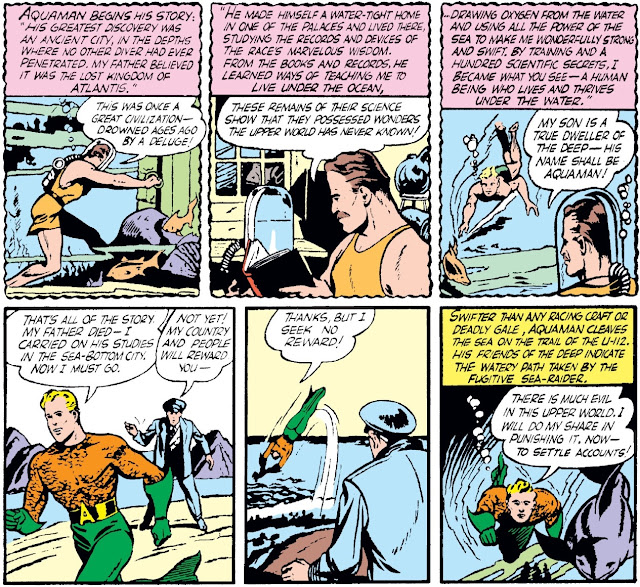 The first major revision comes in 1959’s “How Aquaman Got His Powers,” in which the backstory has changed: Aquaman is now the son of a human “lighthouse-keeper” and an Atlantean woman who abandoned her underwater homeland to see the “upper world.” In the next few stories we learn more about Atlantis, a still-thriving city of beings descended from humans who have biologically adapted to living under the sea. Genetic anomalies are sent to the ocean’s surface in Baby Moses-style floating baskets, in order to be found and raised by land-dwellers; this is how Aquaman gains his child sidekick Aqualad (whose deathly fear of fish results in his expulsion from the great underwater city) in 1960’s “The Kid from Atlantis.”

Most of the early Silver Age comics collected here are illustrated by Ramona Fradon, a rare female comics artist whose work I was unfamiliar with before reading this book. It more than measures up to that of any other artist who was drawing for DC at the time, and it’s a shame that Aquaman lost her talents upon finally receiving his own series in 1962. The stories themselves take a dip in quality at this point as well. Of the previous Golden and Silver Age tales collected here, only one (1943’s “The Streamlined Buccaneers”) features a villain in the traditional sense; in the others, Aquaman contends with more conventional threats to marine life and delves into the mysteries of Atlantis. But starting with the inaugural issue of his self-titled series, Aquaman faces off against more traditional science-fiction and fantasy foes: a triumvirate of giant insects, water fairies, and fire trolls in Aquaman #1 alone.

Things do improve over the 1960s and 1970s, though, which are a bit of a whirlwind: Aquaman marries the sorceress Mera, has a baby (named, um… Aquababy), and becomes the democratically elected ruler of Atlantis, all of which infuse the comics with a unique combination of domestic strife and palace intrigue. The solo stories became fewer after Aquaman’s cancellation in 1971 (the series was briefly resuscitated, for eight issues, from 1977-78), and Celebration of 75 Years fills the gap with a quite engaging 1984 story from the Justice League’s so-called “Detroit Era.” (I’ll have to read more of Gerry Conway’s run on that title when the hardcover Justice League: The Detroit Era Omnibus is released next year.)

This collection’s last half-dozen or so stories are a little more difficult to write about, since they’re mostly pulled from the middle of longer ongoing storylines. While it’s definitely nice to see DC taking steps to reprint parts of Neal Pozner’s four-issue revival from 1986 and Peter David’s nearly 50-issue run from the 1990s, the particular stories selected left me feeling a little out of sorts. (David’s Aquaman #2, in which Aquaman’s left hand is devoured by piranhas, is also somewhat off-putting for its Liefeldian artwork and frankly unnecessary bloodiness.) It doesn’t help that some of this collection’s later issues feature prominent rogues whose early appearances aren’t included, making it hard for an Aquaman-newcomer like me to fully grasp what’s at stake for our hero when they appear. 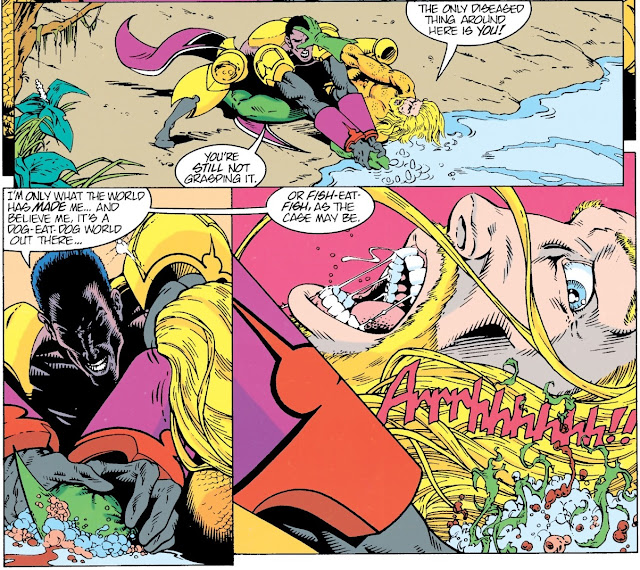 Perhaps unintentionally, the book’s contents underline just how little of Aquaman’s history has been previously collected in comparison to that of characters like Batman, Superman, Wonder Woman, Flash, Green Lantern, and Green Arrow. In fact, we get a sense of those other characters’ preferred status at DC in the choice of cover image for this collection. The image itself, illustrated by DC co-publisher Jim Lee, features Green Lantern almost as prominently as Aquaman. That’s easy to miss when viewing the cover in thumbnail or from a distance, since the book’s cover dress is plastered over the prostrate Hal Jordan; you can still see his limbs awkwardly framing the title, though. Was DC just so married to the idea of using an image by Lee (who has never drawn Aquaman in the character’s own series, and whose work doesn’t appear inside this book) that it couldn’t be bothered to choose something more fitting for a collection focused on Aquaman’s history?

It’s a strange choice, for sure, but it doesn’t take away from the commendable effort put into compiling this volume. I came to it a relative novice in regards to Aquaman but feel I’m walking away with a solid grasp on the character’s history, having now sampled a number of prominent creative runs spanning the better part of a century. Although the early stories provide the book’s most interesting and significant contents, the amount of newly-collected material from all eras makes Aquaman: A Celebration of 75 Years a very welcome primer indeed.

*Special thanks to Jesse Schedeen for his help with the images that appear in this review.
Posted by Marc at 9:00 AM