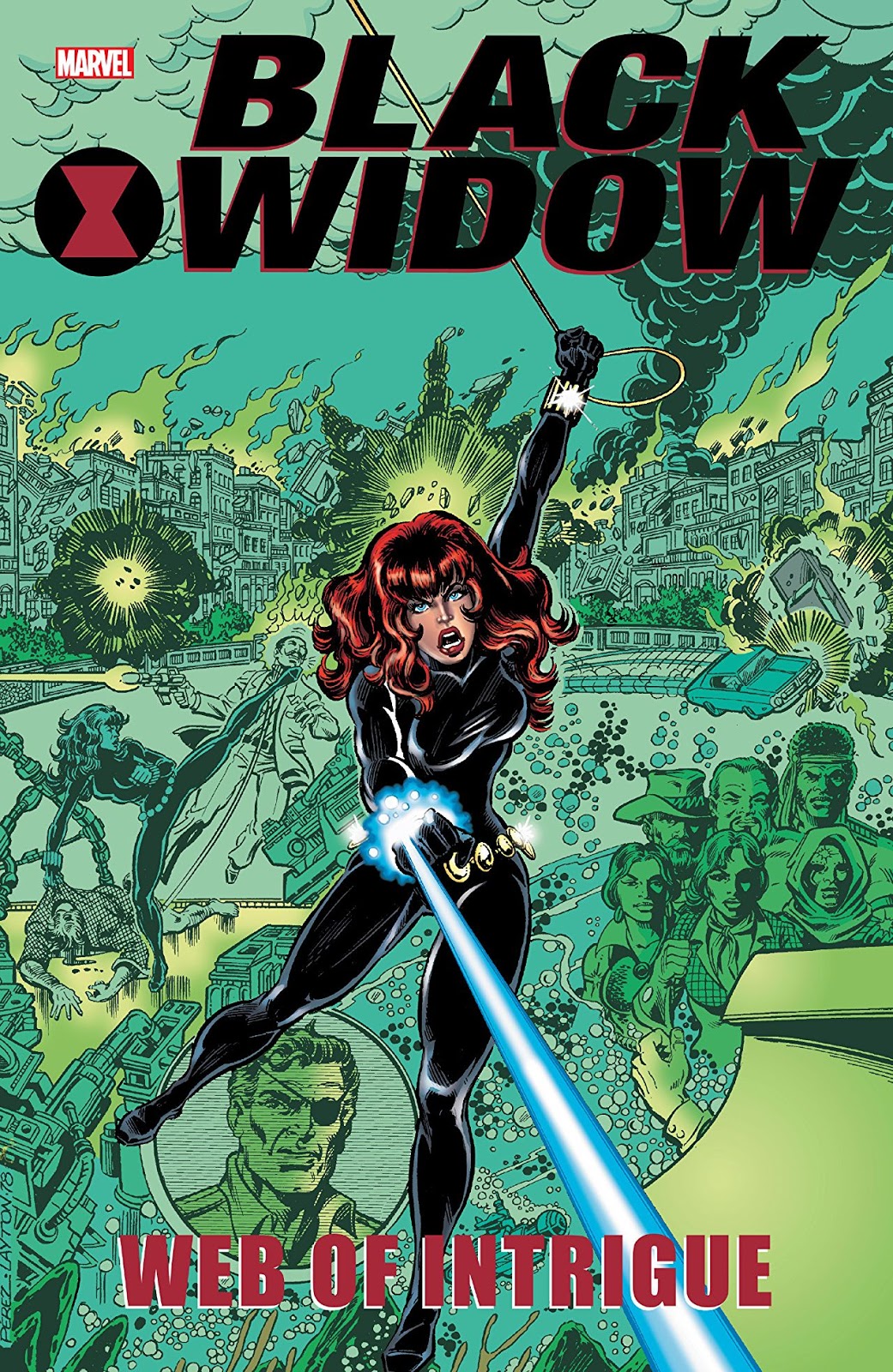 In the last few years, Marvel Studios president Kevin Feige has repeatedly insisted that making movies about female superheroes is an important priority for him. The claim is rather shocking given that Feige has produced more than thirty superhero movies over the last two decades, only one of which (2005’s Elektra) has featured a female character in the lead. While Russian super-spy Black Widow has long been considered the most obvious female candidate for a solo superhero movie at Marvel (given Scarlett Johansson’s portrayal of the character across five movies since 2010, with at least two more Avengers movies in the works), plans for any such film have yet to materialize. In fact, the first female-led Marvel Studios film will apparently be 2019’s Captain Marvel – not the most obvious choice, since the character has yet to appear in a Marvel film. It’s also disappointing in that both Captain Marvel’s world and her superhuman abilities are generally in keeping with the kind of superhero movies we’ve seen time and again, whereas Black Widow’s milieu is more in line with the likes of James Bond or The Avengers (the 1960s British television series, not Marvel’s superhero franchise).

I mention all of this because I’d hoped that Black Widow: Web of Intrigue might establish a worthy blueprint for the argument that stories about female superheroes – and the character Black Widow in particular – have just as much potential for mainstream appeal as Iron Man, Captain America, Thor, and other white male superheroes. Of course, any number of more recently published female superhero comics (not to mention last week’s Wonder Woman feature film) could be marshaled to that argument – including, yes, a number starring Captain Marvel. But what might have made Web of Intrigue a more worthy proving ground is the ubiquity of its main attraction, a four-issue run on the 1980s series Marvel Fanfare by writer Ralph Macchio and artist George Pérez. It’s been reprinted several times, including in magazine form in 1999 and in a 2010 hardcover as part of Marvel’s Premiere Classics line. In the comics world, that sort of longevity – as in the cases of The Dark Phoenix Saga, The Death of Gwen Stacy, and God Loves, Man Kills, stories from the 1970s and 1980s that have been (or soon will be) adapted as feature films – tends to be its own kind of pedigree, at least in Hollywood’s eyes.

Unfortunately, Web of Intrigue is a profound disappointment in terms of how it represents its female protagonist, and I can only hope that stories like this one won’t ever be used as a model for superhero films starring women. The story sheds consistent doubt on Black Widow’s professional competence and emotional fitness for the job, linking those qualities explicitly to her gender: “If it came down to a showdown,” she wonders, “would Natasha Romanoff, the woman, allow Black Widow, the spy, to perform her duty? I had no answer.” The story also defines the character almost exclusively in relation to men. Her mission – to track down the father figure who raised her, who has possibly defected to the Soviet Union – is further complicated by the feelings she develops for a Soviet-employed American scientist she seduces while working undercover. Her top-secret S.H.I.E.L.D. dossier, as recounted by Nick Fury for a panel of the international spy organization’s all-male leadership, lists not her achievements in the field but rather which male superheroes she’s dated. It doesn’t help that Web of Intrigue is painfully overwritten by Macchio, who is rightly better known for his various editorial roles at Marvel than as a writer. In action scenes, especially, he refuses to let Pérez’s artwork speak for itself. When Pérez draws Black Widow performing a (perfectly visually comprehensible) midair twist to take out two goons who are shooting at her, for instance, Macchio can’t resist scripting this clunker of a thought bubble: “I heard others scrambling about on the roof while I was inside…must twist as I fall to fire at them.” But worse is Macchio’s dialogue for Fury, who reads like a stereotypical Southern hick straight out of The Dukes of Hazzard: “Awright, Sam, I got all this info you wuz askin’ fer. But, in the future, howzabout lettin’ me give the orders around here. I wuzn’t hired to be no blasted errand boy, y’know.”

It’s actually pretty astonishing just how many offensive stereotypes Web of Intrigue manages to include in just four issues. A multiethnic team of assassins dispatched to capture Black Widow comprises a mostly naked sumo wrestler and an (even more naked) spear-chucking warrior who Black Widow refers to as “the African.” The book’s protagonist unreflexively calls Chinese-American S.H.I.E.L.D. agent Jimmy Woo an “Oriental,” despite the term having fallen out of fashion nearly ten years before these comics were published. And it all ends with a masterclass in the objectification of the female body, with the contrivance of this excuse for Black Widow to run around in her underwear for the story’s last ten or fifteen pages: 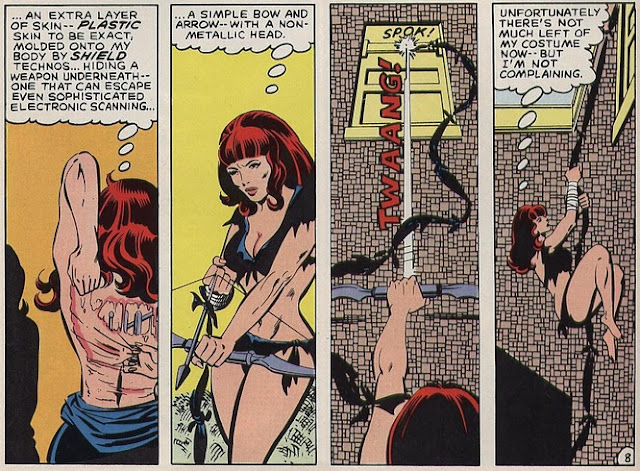 The trade paperback edition of Web of Intrigue includes another two stories beyond the four-issue Marvel Fanfare storyline. The first is a fairly incoherent black-and-white tale that seems mostly an excuse for artist Paul Gulacy to draw the story’s characters as various Hollywood celebrities of years gone by. It ends, inexplicably, with two pages of Macchio’s purple prose recited by a Humphrey Bogart stand-in.

This book’s second “bonus” is the 60-page graphic novel Black Widow: The Coldest War, by writer Gerry Conway and artist George Freeman. Published in 1990, it follows up on the story of Black Widow’s first husband: Red Guardian, the Soviets’ answer to Captain America. It’s the best part of this collection, but that isn’t saying much; like the previous stories, it’s still uncomfortably concerned with positioning Black Widow’s professional capabilities in relation to her gender and sexuality. Characters’ names are spelled inconsistently throughout the story and text is sometimes hard to read against the background colors, signs of how cursory the editing and production design for Marvel’s early-1990s graphic novels often were.

As much as I wanted to be able to advocate for this book, I’m afraid I can’t see much that’s positive in Black Widow: Web of Intrigue. It’s precisely the sort of female-led superhero comic that today’s films and comics should strive not to emulate. That doesn’t mean that film studios and comic book publishers shouldn’t strive for parity in their representations of women, though; it simply suggests that, in telling future stories about women superheroes, we might all be better served by looking to the cultural attitudes of our own time rather than seeking creative inspiration from the past.
Posted by Marc at 9:30 PM