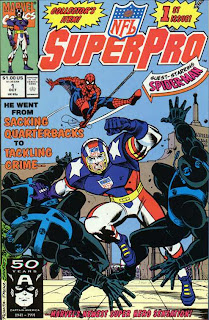 It’s that time of year again: the day when we all pause for a moment of silence to remember the greatest hero and sports legend ever to star in his own Marvel comic book. That’s right, ladies and gentleman. Today is NFL Superpro Appreciation Day.

Okay, so I’m just messing around a bit (even though I really would like to see Marvel release an NFL Superpro collection one day!). I hope everyone is enjoying Super Bowl Sunday; personally, I’m pretty excited. As a proud resident of Wisconsin, you can probably guess who I’ll be rooting for, but I honestly think both teams are pretty evenly matched and that it will be an exciting game, no matter who comes out on top (must…resist…Roethlisberger joke).

But you didn’t come here for my thoughts on football – or at least, I certainly hope you didn’t! I sort of fell off the two-reviews-per-week schedule I had intended for last month, but on the bright side, I did manage to post more reviews than if I had been doing them once a week. I’ll make up the ones I missed with extra reviews at some point in the future, I promise. At least for this month, though, I’ll be doing my best to keep to a weekly schedule.

In other news, I’ve updated the Marvel TPB Timeline yet again with over 150 new books. The 1980s are now finished, and so is 2005 (aside from House of M, which goes at the end of the year and will be part of the next update). There have been a lot of requests for me to add material that takes place after Avengers Disassembled, so hopefully this will satisfy people at least until the next update!

Stay tuned for more timeline updates and for a new review sometime this week!
Posted by Marc at 3:53 PM