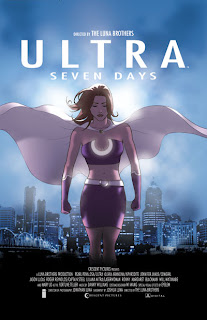 It wasn’t exactly a fair comparison – I’ve never seen an entire episode of Sex and the City, so I don’t know for sure whether this book is really the superhero equivalent. However, its premise, at least at first, seemed very similar to my impression of what Sex and the City is about, in that both the show and this comic book focus on a trio of women who spend their time looking for love and spouting raunchy one-liners at each other. The main difference in Ultra, it seemed, is that those women happen to be superheroes.

The book begins by introducing us to Pearl Penalosa, the superheroine also known as Ultra. Out for a night on the town with her two best friends, known in costume as Aphrodite and Cowgirl, Pearl stops to see a fortune-teller who predicts that she will find true love within the next seven days. Skeptical at first, Pearl eventually starts to believe her fortune may come true – perhaps largely out of desperation, since she’s had little luck with men since breaking up with her superhero boyfriend several years earlier.

You can probably see the parallels to Sex and the City already. As the story progresses, though, it moves away from those initial similarities fairly significantly. In fact, it probably has more in common with America’s real-life obsession with Hollywood than anything else. You see, in the world of Ultra, superheroes are celebrities. They appear on magazine covers and billboards, they advertise lingerie and cigarettes, and their romantic lives are front-page news on tabloids across the country. They even have a highly competitive, annual superhero award show which, much like the Oscars and the Golden Globes in real life, draws just as much attention for what its participants are wearing as for their actual achievements.

The parallels to real-world celebrity culture are fairly obvious, but they’re also quite funny in their utter ridiculousness. More importantly, they don’t steal the spotlight from Pearl’s emotional conflicts – which, by contrast, the book treats very seriously. To say much more about the plot would be to spoil much of the pleasure that comes from actually reading the book, but rest assured, it’s a very satisfying and unpredictable journey from beginning to end.

Ultra is the first comic book written and drawn by the brothers Jonathan and Joshua Luna, who have since gone on to much wider popularity for their series Girls, The Sword, and a handful of other titles. Based on the fact that Ultra was their first published work, I was expecting it to be pretty rough around the edges. As it turns out, it’s one of the best surprises I’ve had reading comics in the last year. The art is simple, but sleek, polished, and pleasing to the eye. The dialogue is tight and witty, and I love the way that the Luna brothers resist what could very easily have been a run-of-the-mill, conventional ending.

In the end, my initial reaction towards this book was wrong, and I’m glad. I honestly hope some of you who read this review will take the same chance on Ultra that I did – I think you may be just as pleasantly surprised.