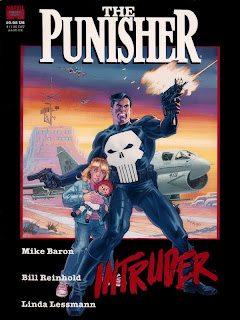 I know I said I would be posting two reviews a week for January, but alas, I just don’t think that second review is going to happen this week. But just to make it up to you, I’ve posted yet another big update to the Marvel TPB Timeline! This one isn’t as noticeable as previous ones at first glance, since I haven’t added any new years to the timeline. Instead, I’ve added TONS of books that were missing for 1984-2004 – and while I didn’t count how many there were, I think it’s safe to say that there are over two hundred new books in the timeline. Heck, a couple dozen books were added featuring the Punisher alone!

Some other titles that have been added include Squadron Supreme, Star Comics, The ‘Nam, Women of Marvel, the New Universe books, JLA/Avengers, various inter-company crossovers, more anthology and “Best of” trades and hardcovers, a handful of upcoming trades, and well over a hundred original graphic novels. I’ve added new links and information about out-of-print versions of many trades and OGNs, and I’ve also updated and corrected the annotations for too many books to even begin to list. I owe a big debt to Ian at Trade Reading Order for his help in pointing out several resources that contained details on many of the books I was missing.

The next step is to go through the years 1984-2004 one last time to add a few other things I missed (I should add some information on the original Age of Apocalypse and Onslaught trades, for example). Once that’s through, the updates should come a bit more fast and furious. The next update will finish up the 1980s by adding the first few years of the decade, as well as add some post-“Avengers Disassembled” material, probably up to the “House of M” crossover.

As always, if you have thoughts or suggestions (and especially if you spot any errors!), feel free to leave a comment or send me an email at marveltimeline@gmail.com. Thanks for stopping by!
Posted by Marc at 12:50 AM