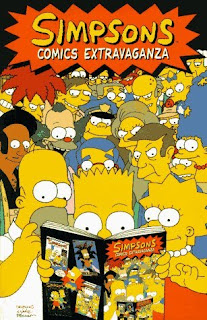 I am a huge Simpsons fan. Heck, I’ve probably seen more episodes of The Simpsons than I’ve read Wolverine comics – and as I’ve mentioned on this blog before, I’ve read more Wolverine comics than any other person alive. As much as I like the show, though, I never really gave the comics a chance before reading this trade. I always assumed that the comics were made by people with little or no relationship with the people who make the show, and that the stories in the comics were of the more childish, slapstick variety that the show itself has devolved into since the late 1990s. And since the trades don’t have volume numbers, I also assumed that they were poorly organized and/or didn’t reprint the comics in any kind of order – not that I thought there would be an ongoing story or anything like that, but I’m a stickler for reading things in publication order whenever possible.

Well, you know what they say about assuming. In fact, I was wrong about Simpsons Comics on pretty much all counts. The comics are published, as it turns out, by Bongo Comics, a company formed by Steve Vance, Bill Morrison, and show creator Matt Groening for the specific purpose of making comics based on The Simpsons. (They’ve since expanded to doing Futurama comics as well.) Furthermore, the comics have actually been collected very systematically in trade form, even if there aren’t specific volume numbers. 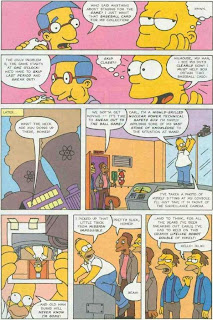 Vance (along with his wife Cindy, who serves as co-plotter) writes the world of Springfield far better than I would ever have expected from any format other than the actual show. He really nails each character’s voice, so much so that I could actually hear the show’s cast in my head as I was reading. Nearly every significant supporting character makes an appearance too, from Principal Skinner to Sideshow Bob. Some of the stories in this trade, which collects the first four issues of Simpsons Comics, are actually just as entertaining as some of the better episodes of the show. Much like the TV writers, Vance makes full use of his knowledge of popular culture by crafting plots that make intricate reference to Cool Hand Luke, The Maltese Falcon, and other great films, novels, and comics.

This makes for a very self-aware comic book, one filled with in-jokes pertaining to the medium. This comes through most clearly in the short back-up stories at the end of each issue, which serve as intelligent parodies of other comic book genres. There’s a 1950s-style romance story, for example, in which Marge believes Homer is cheating on her with her sister Selma. There’s also a spot-on EC horror send-up starring Homer as “the Collector,” a self-centered man who hoards – what else? – comic books! 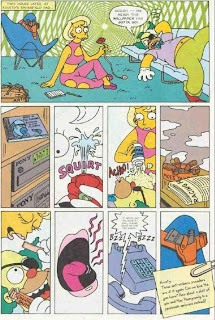 The best of these parodies is “Krusty, Agent of K.L.O.W.N.”, a parody of Jim Steranko’s popular 1960s Nick Fury series, which I found absolutely hilarious. Interestingly enough, it’s written by Dan Castellaneta (who voices Homer, Grampa, Krusty, and other characters on the show) and his wife Deb Lacusta. Rather than try to explain what makes the story so great, I’ll just let you take a look for yourself at the scan to the left, which should bring a smile to anyone with a fondness for comic book history. (If the reference doesn't ring a bell, take a look here!)

There’s not a lot to say about the art in Simpsons Comics Extravaganza (though I’ll try anyway), since it looks exactly as you would expect it to look – that is, each panel essentially looks like a freeze-frame from the show. Vance does the layouts for almost every story, with the finished art being completed by either Bill Morrison or Tim Bavington, or both, depending on the story. The only exception is the “The Collector,” which features art by Sondra Roy. The art looks pretty consistent throughout the book, though, no matter who’s credited for the story in question.

I’m really happy that I gave the Simpsons comic book a chance, and if you’re a fan of the show, I would highly recommend checking it out. It’s surprisingly intelligent, and while it may not reach the heights of some of the TV series’ best episodes, it’s still very funny and well worth the affordable cover price.