Review: The Chronicles of Conan, Vol. 2: Rogues in the House and Other Stories 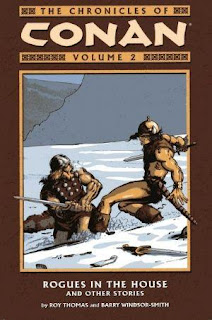 At the end of my review of the first Chronicles of Conan trade, I worried that, going forward, the story-telling patterns I was beginning to notice could potentially grow stale within a few issues. Luckily, my fears weren’t at all justified in that respect. This second trade in Dark Horse’s effort to collect the original Marvel series from beginning to end is everything I could ask for story-wise, although it has some crippling issues in terms of presentation (more on that later).

In Rogues in the House and Other Stories, writer Roy Thomas continues to use Robert E. Howard’s original Conan prose stories as the primary basis for the comics. However, he also adds a great deal of his own flavor by filling in the chronological gaps with stories of his own, as well as with adaptations of Howard stories which originally didn’t feature Conan at all. As with the first volume, Thomas’s stories fit so nicely into the Conan mythos that it’s hard to tell which stories are his and which are Howard’s (at least for those of us without a huge reservoir of Conan knowledge).

Each issue could theoretically be read on its own without much confusion, but Thomas’s attention to chronology is beginning to make for a very interesting overarching plot. That’s what I liked most about this book – seeing the story progress and the character of Conan develop from issue to issue. A significant portion of this trade takes place in the same city and features an impressive number of recurring characters, with one adventure leading directly into the next.

The highlight of the book is the double-sized story “Rogues in the House,” in which Conan must find his way out of a monster-filled, booby-trapped palace along with the city’s corrupt ruler and the leader of the ruler’s rebel opposition. It’s really interesting to see Conan forced to interact with characters so unlike himself (without fighting them, that is), and for a few minutes the story almost made me wish I could see how Conan would fare on a superhero team like the Avengers or the Justice League, as ridiculous as that may sound.

There isn’t a bad story in the book, to be honest, but among my other favorites are “The Garden of Fear” and “The Frost-Giant’s Daughter.” In the former, Conan must rescue his female companion Jenna (who joined up with Conan at the end of the first trade) from a winged, man-like creature in a tower surrounded by deadly, man-eating flowers – and he ultimately does so, with the help of a pack of woolly mammoths. In the latter (which is based on one of the few original Conan stories I’ve actually read), Conan is the last man standing at the end of a vicious battle, and when he sees a beautiful young woman, he begins to chase her through the frozen wasteland – but is she real, or just a figment of Conan’s battle-wearied imagination?

As you might have picked up, there’s a surprising amount of variety to the stories in this trade. Unfortunately, all of that is rendered almost moot by the patently awful job that Dark Horse has done in “restoring” these comics. Honestly, in all the time that I’ve spent reading comics over the years, this is one of the very worst treatments of older material I have ever seen in a collected edition. First of all, the original colors have been thrown completely out the window – instead, digital colorists have applied a repulsive “airbrush” style to Barry Windsor-Smith’s artwork, complete with pedestrian-looking color gradients that could only ever be created with a computer program like Photoshop. The result is a book that looks nothing like any comic would actually have looked in the 1970s – nor, for that matter, how any sane person with the gift of sight would color a book today.

Furthermore, Dark Horse’s colorists didn’t even follow the original color guidelines. Clothing, hair color, backgrounds, etc. – almost everything has had its color changed for this collection, without any explanation. They’ve even changed the thin black lines that Windsor-Smith occasionally drew on his characters to indicate streaming blood to a bright, garish red hue – something that never would have been acceptable in a Code-approved comic book at the time of Conan’s original publication. Nonsense like that not only betrays the original integrity of these comics, but it’s somewhat insulting to the reader. I appreciate the trouble, Dark Horse, but I really don’t need to see bright-red blood spraying everywhere like a Mortal Kombat game in order to understand that this comic has violence in it.

Worst of all, the colorists have inexplicably decided to actually erase portions of Windsor-Smith’s linework. It’s most obvious in the “Rogues in the House” issue, but it occurs throughout the rest of the volume as well. It absolutely baffles me to see such a heinous job done with the presentation side of this book, especially when the colorists who worked on the first trade were perfectly adequate and respectful of the source material. I hope future volumes in this series will return to that first batch of colorists, because if I find out that any more of them feature the work of this coloring team, this will be the last book in the series that I read.

There’s no denying that the stories in this volume are excellent, but this is one case where the abhorrent art reproduction simply can’t be ignored. As much as it pains me to tell anyone to pass up these great stories, the truth of the matter is that I think anyone truly interested should wait until Dark Horse gives this collection a properly re-colored second printing.