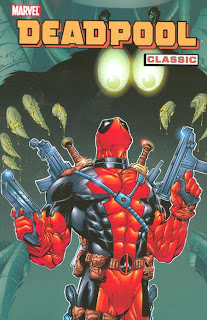 It’s taken three volumes now, but I think my patience with the Deadpool Classic series is finally starting to wear a little thin. The main reason for my frustration is that while writer Joe Kelly clearly has an idea of where he wants to take the story, he doesn’t seem to know how to properly get there. This book takes us up through the 17th issue of Deadpool’s ongoing series – a point by which I think it’s reasonable to have expected the main plot to have progressed a lot more than it actually has. Unfortunately, the nine issues collected here do little aside from meander as Kelly seemingly goes out of his way to portray Deadpool as a genuinely unlikeable human being.

Picking up on one of the main plot threads from the previous volume, Deadpool Classic, Vol. 3 concerns itself mostly with the main character’s struggle to determine whether he’s ultimately a hero or a villain. While the folks at intergalactic law firm Landau, Luckman & Lake maintain that he’s some sort of “chosen one” meant to restore balance to the universe and whatnot, Deadpool’s actions consistently speak to the contrary. This was the case in Vol. 2 as well, but at least in that book I got the sense that Deadpool legitimately wanted to become one of the “good guys.” Here, he talks a lot about wanting to change for Siryn, the woman he loves (who only appears in one issue, sadly – I think she’s a great character), but doesn’t seem to be motivated by much else – least of all, his conscience. In fact, he spends so much time being self-centered and actively resisting LL&L’s attempts to help him be a hero that I had a hard time believing he really wants to change at all.

Overall, I think I get what Kelly is trying to do. He’s trying to bring Deadpool to such a low point that the only way for him to go is up – thus justifying his eventual shift from anti-hero to hero. (Of course, at the rate the story is going right now, I can’t imagine that shift taking place for at least another two volumes, and even then I don’t expect for it to last long.) The thing is, Deadpool was already brought to a sufficient low by his fight with Typhoid Mary at the end of Vol. 2 – the fact that he acts like a jerk for most of this volume doesn’t get him any lower, it just forces us to wallow along with Deadpool in a weird state of limbo created by the character’s alternating feelings of denial and self-pity.

In other words, Kelly isn’t actually developing the character or his situation at all here; instead, he brings Deadpool to his lowest point and then spends nine issues rubbing the reader’s face in it. The worst part comes when Deadpool locks up Blind Al and Weasel, his only friends, in a torture chamber for absolutely no reason. (Even more troubling is that when Deadpool finally offers an apology four issues later, Kelly apparently means for the reader to accept it.) Kelly still (annoyingly) doesn’t reveal the exact nature of Deadpool’s relationship with Al, an old woman he’s been keeping prisoner since the series’ first issue. I think we’re supposed to be amused at the bizarre Stockholm syndrome thing going on between the two, but at this point it’s really just creeping me out.

And maybe it’s just that I’ve read too much Deadpool lately, but the character’s sense of humor (at least, the way Joe Kelly writes it) has become just plain annoying to me. It’s extremely repetitive, for one thing – I counted at least three jokes involving the word “duodenum” in this volume alone, and just as many involving people having their butts “kicked so hard they can taste their breakfast.” I imagine I would have had a much easier time enjoying the dialogue if not for seeing the same verbal tics repeated over and over.

The one highlight of this book is a double-sized issue in which Deadpool travels back in time and uses an image inducer to impersonate Peter Parker throughout the events of the classic Amazing Spider-Man #47 (which is reprinted in its entirety here as well). Artist Pete Woods does a good job of imitating John Romita’s style for the scenes taking place in the past, and of inserting Deadpool into a number of actual Romita-drawn panels taken from the original comic. Plus, the framing story features the Great Lakes Avengers (who call themselves the Lightning Rods here, after the Thunderbolts), a group that never fails to amuse me.

Aside from Woods, the art in this book is handled by a variety of artists. Ed McGuinness only draws the first issue, but he’s followed by Shannon Denton, whose style is very similar. The final four issues are drawn by Walter McDaniel, whose style is more realistic and less manga-influenced than either McGuinness’s or Denton’s; I had never come across his work before, but it’s very similar to what Bryan Hitch was up to in the late ’90s. All of the artists featured are a decent fit for the book, even if none of them are mind-blowingly great.

Despite the time-travel issue and the artwork, though, this book failed to impress me on the whole. The series has slipped into a formula that, while not intrinsically bad, has grown pretty tiresome as a result of its being dragged out for so long. I’m not writing the series off entirely, since I think it could reclaim some of its former glory if it gets out of its current rut and Deadpool finally embraces his “destiny” to become a hero. Still, it’s got a pretty steep mountain to climb to make me forget this disappointing volume.