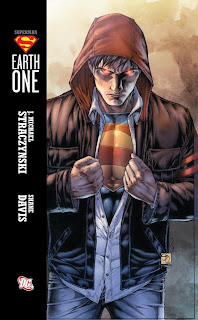 From the moment it was first announced, and nearly every time I’ve heard mention of Superman: Earth One since, one word has come to mind: “baggage.”

Because that’s what almost every person who talks about this book seems to bring to the table, right? Baggage. Most of the comments I read online about this book before its release had to do with whether or not J. Michael Straczynski should even be writing Earth One in the first place (rather than the main Superman series), whether or not the world really “needed” another version of Superman’s origin, and whether or not original graphic novels are a thing of the past or a bold new approach in our current “Golden Age of Reprints.” For whatever reason, a number of people believed they had some kind of stake in this book, and they shouted it from the proverbial rooftops.

Personally, I think most of the debates that have constellated around this title are downright silly. That anyone should feel entitled to having Straczynski write this or that Superman comic rather than the one he actually wants to write is ridiculous, as is the argument that stories taking place outside of standard continuity are “unnecessary.” If anything, between books like All-Star Superman and Superman: Red Son, Superman is actually the poster child for characters with relevant and worthwhile alternate-universe stories. But these are arguments that were settled, at least by rational comic book readers, long before this particular book was even conceived of. Call me crazy, but I read comics for personal enjoyment, rather than with a cynical eye for the latest way comics and their creators have supposedly screwed me over. 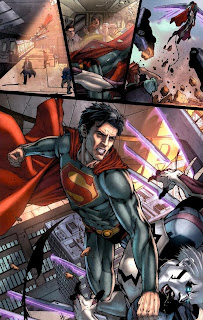 Of course, it’s quite possible that someone reading this may be only vaguely aware of the central conceit of Earth One, in which case I apologize for what must have seemed a puzzling start to this review. To give it a more proper introduction, the book is an original graphic novel (the first in a projected series) written by J. Michael Straczynski and penciled by Shane Davis. It presents us with an alternate version of Superman’s beginnings, while at the same time striving to match the “real” version of the character both tonally and thematically. In Earth One, Clark Kent is a confused young man who has just arrived in Metropolis, and just like the traditional version of the character, he possesses the ability to do nearly anything he sets his mind to. This is evidenced in a series of amusing scenes in which he “applies” and is “accepted” for a number of different jobs, ranging from professional football player to think-tank research scientist. Straczynski is careful not to play for too many laughs, though, emphasizing Clark’s sense that his powers keep him constantly isolated from the rest of the world.

The main question he faces is what to do with all the power he possesses. Unlike they do in the main DC Universe, Clark’s adoptive parents don’t actively encourage him to be a superhero – instead, they simply want him to find whatever it is in life that will make him the most happy. When hostile aliens attack the planet in search of the last survivor of Krypton, Clark is thus put in an incredibly difficult position. He doesn’t want the world to know how different from everyone else he truly is, but at the same time, exposing his true nature may be the only way to save the world from destruction.

It’s rare these days for alien invasions in comic books to really carry any weight or suspense, but Straczynski pulls it off tremendously here (even if the aliens’ leader does sort of look like a reject from The Cure). In a twist on Superman’s traditional origin story, Krypton didn’t just explode – it was assassinated, and its killers are more than willing to give Earth the same treatment if they don’t get what they want. Perhaps needless to say, Clark does ultimately end up donning the traditional blue and red, and once he does, Davis treats us to a truly breathtaking and action-packed climax. 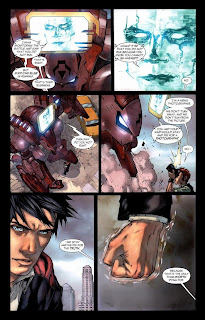 Along the way, Straczynski does an excellent job of reminding us what Superman has always stood for, but in a way that breathes new life into old characters and concepts. Lois Lane and Jimmy Olsen both play pivotal roles in the story, for instance, but not in the capacity you might expect. Straczynski clearly remembers that the reason we love Superman, as a culture, is that he represents the best in all of us, and the story reminds us of that in its unique take on these characters, especially Jimmy.

The ending of Superman: Earth One sets the stage for possible sequels, but it works perfectly well as a self-contained narrative as well. I have to admit that, despite not coming to the book with any preconceived notions, it still far exceeded my expectations. This is easily one of the better Superman stories I’ve read in recent memory, and certainly the best one to be published since the turn of the decade. My only complaint, as clichéd as it is to say this, is that I wish it had lasted longer – not because it was too short, but simply because it’s not often that I have the pleasure of reading comics this good.